When I picked her up, she looked moody and sad 😔- not like usual. Of course, I was concerned – but I cannot force her to tell me what happened when she wasn’t ready. Later when we got to car, she opened up and said one of her bffs said to her ‘She says I don’t have friends!😔’

Obviously, Noelle was hurt by the statement. Well, she got to learn that we can’t control what other people say – and sometimes people could be JUST mean! I told Noelle that she doesn’t have to care what her friend says – moreover, this friend has been a ‘bully’ and not truthful! 😒 If she thinks what her friend says is not right, don’t bother. If she thinks what her friend says is right, move on – figure out something about it. Then I gave her further examples – who’s her friends during Mandarin class and even Zumba, who sat next to her in class or during Moral class. Who are the other friends who ate with her during recess? In fact, at home, Nikki and Norrah – aren’t her ‘friends’? 🙄🙄

After that, she lightened up. Happier when they played in the bathroom (during bath time) while I prepared lunch. So, after lunch, we made this jam drop that she has been wanting to do. She is back to herself now! 😁😁

To my dear Noelle,

I can’t shield you from how people tend to hurt you; but I can only tell you ‘all will be fine! I am the shoulder for you to lean on!’ 😘😘

Today is Noelle’s turn to make jam drops. She can do A to Z of the process -it is THAT easy! 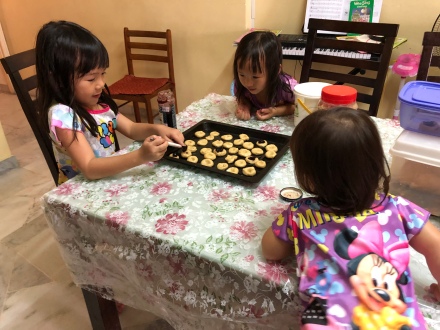