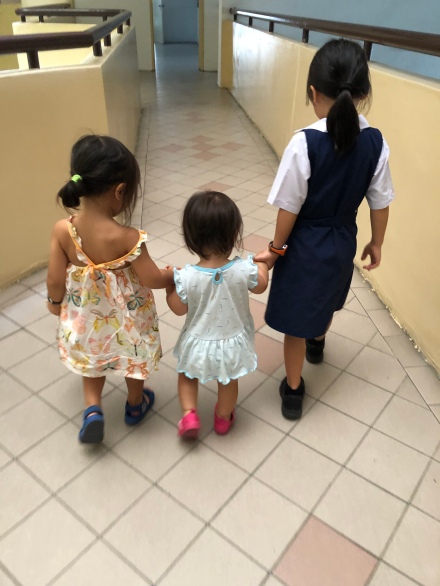 – [ ] After 3 days of trial (going in during recess), I have learn to ‘let go’ and put trust that Noelle can look after herself during recess. And yes, she did it. She has been responsible with handling her food containers and bag. In her initial day, she gave in to her friends’ requests for her food pickers and trusted that they will return them. One did and others didn’t – but it served her as a lesson on who to trust.

– [ ] She lost her water bottle once and it was because she forgotten to bring along after class. We went back to class to search (found out after we reached the car) and it was no longer there.

– [ ] Noelle is allergic to ‘normal’ school shoes and socks 🙄🙄 We went around to find suitable ones for her. Finally found Nike brand shoe for her🙄 (H&M and bata first socks )So far, so good…and I made her soak her feet into Chinese parsley water again, and she is on the road to a smoother feet now!

– [ ] Noelle meets a ‘bully’ who asked for money. The ‘bully’ happens to be a friend she appreciates a lot. We taught her to say NO and OK to “don’t friend you!” She managed to do it. But the ‘bully’ kept pestering and we resorted to contacting the mother of the bully. For two weeks, it went pass without pressure. But then the ‘habit’ returned. At the end, the mother of the bully suggested a video call between the kids – and yes, we did it. Noelle who didn’t do anything wrong was firm with what she told us while the ‘bully’ cried. So at the end, the mother said her daughter was just ‘joking’ with Noelle. We told her off that there shall no more such jokes. So far, so good.

– [ ] I went for the school PIBG meeting and saw how things were running. Not much comment on this. We paid the pibg fees though it is not an obligation. We also tried to help in ways possible – for example, collecting recyclable materials for the pibg school project

– [ ] Noelle and I went for class gotong-royong.

– [ ] Noelle started her extra Mandarin class in mid February. For two weeks, I sent her lunch box. From third week onwards, Noelle said that she can handle her lunch herself – which she did. She has proven to us that she is indeed very independent. It is social and emotional skills she learnt that kept her in school.

– [ ] Noelle loses her voice quite often! 🙄🤦🏻‍♀️ She says that there’s reading out loud and also some screaming happening amongst her friends. 😒

– [ ] In March, Noelle adheres to my suggestion of mixing around with more people. She doesn’t just stick to one or two friends during recess. She has telling me new names each other day. I am very happy for her (I know making first step is not easy – from my point of view)

– [ ] Noelle is coping in the school. Thanks to the school being in the Dual Language Programme where Science and Maths are taught in English. I would say she has been doing well (if not just catching up). The only one year she had in kindy helped her transition easier. I have not been ‘revising’ with her so far and only ‘helps’ if she asked.

– [ ] After two months in school, Noelle finally ‘found’ the quicker way to walk to the guard house!🙄🤣 but it is a great discovery by herself and definitely shorten our waiting time. I don’t mind she takes time to ‘learn’ something because it is the ‘effort’ that matters.

– [ ] I know few of Noelle’s classmates’ parents/guardians who wait for the kids (like me). Ok la, I can ‘chat’ with them – but not really much. It really takes both hands to clap – I can do so much effort only ok? And sometimes pretty lazy to find topics to talk about and I don’t want to go into ‘comparing’ or ‘judging’ our kids.

– [ ] I tried to ‘be friendly’ in the class WhatsApp group. But soon realised – ‘aiyo, why all these spoon feeding?’ That I don’t bother replying even though I do ask Noelle about it. I only reply to queries that matter to us especially after the admin group ‘shoot’ me wrongly (she was not well informed).

I believe many still wonder (in fact I was asked again this week) – why we don’t send Noelle to SJKC (which is just next door to her current school)! Honestly speaking, I don’t want to cramp myself with teaching her Chinese when I myself don’t know. Secondly, both hubby and I are from SK schools – so we more or less know how it runs (though it may be two decades ago🤭)! Anyway, ‘we like la’. 🙄🤣

One week break is finally here!