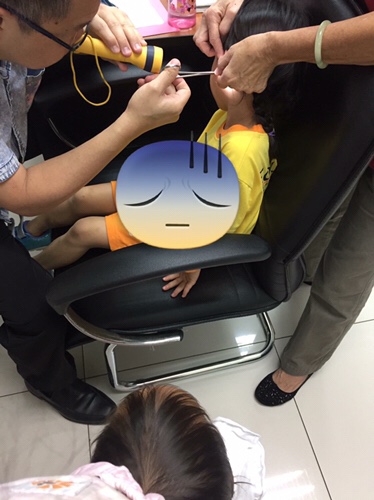 ….since midnight. Nikki and Norrah taking turns to wake up for nursing. Then Noelle screaming in pain. Initially thought her tooth ache, but after giving her ice water, she realized is her ear drums again (but the left side this time). I gave her ibuprofen to soothe her. She slept back and woke again later to go to loo. Then she wanted mama to hug and Nikki wanted mama also- switched bed again!Ding dong I think I woke up more than 10 times yesterday.

She was ready to go school. But before hubby going off with her, she suddenly says she wants mama plus showing signs that her ear drum is pain again (at one point she even scared me off when she says she can’t hear me). I told her I will send her to paed at 9 am and drop her off to school if she is ok. Then I hurriedly shower myself and Nikki (Norrah was showered already). Noelle suddenly says she want to poo😰. She pooed while I get ready whatever we needed including snacks in car. After that we left for the paed. The paed only arrived at 930,examined her – lungs clear, no fever, no sore throat but only normal runny nose. He wanted to look at the left ear drum but was blocked by ear wax. He thought of digging it out (in the pic) but the ear wax was stuck onto the ear drums. Noelle screamed out and then cried on the point the paed stopped digging. He diagnosed it as ear infection and prescribed antibiotic. I fed Noelle the medication there itself as she still wanted to go school.

She did continue her baby/pity cry as we walked to the car. I calmed her by patting her back and hugging her. Nikki acted maturely by helping me carry the bottle of medication. It was still jam as we drove to her school. Noelle made a fuss that I forgotten to pass her a hanky. She wanted me to drive home to pick a hanky before driving her to school!😒it was a clear no and if I were to drive home then she won’t be going school today. I even suggested to her to take Norrah’s bib! 🙄She continued fussing around and I suddenly remembered that I did pack a hanky in her extra set of clothes to school. Thank God I did! So I dropped her to school where she looks very normal. I also informed the teacher about her ear drum pain! (Hubby actually called up the principal that Noelle will be entering school later than usual)

After this round of recovery, guess we need to bring her see a proper ear specialist!