Last day of my planned meal
Breakfast: Egg mayo and fruits (no pic)

Lunch: Salted egg fried rice (for hubby and I)

Spinach noodles in soup with cheese omelette (for kids) 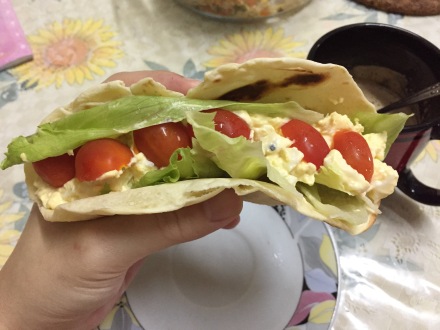 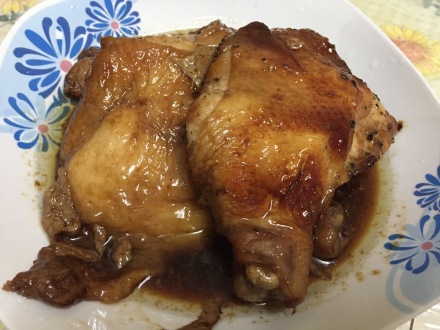 Today marks two weeks since we welcomed baby Norrah. And it means I had two weeks of ‘recuperating’ from labour. Yeah, it is recuperating rather than ‘confinement’ since I don’t confine myself.
Like the other two kids, we didn’t have any confinement lady with us. With Noelle, we had confinement catering – but we regretted the decision – for poor service and it being pricey. With Nikki, I decided to prepared my (our) own food – and with this ‘experience’ (plus I had a pleasant time deciding my own food), we decided to go ahead with our decision to preparing our own food after delivery of Norrah!
Many did ask me if I were getting a confinement lady this time round – and a few assured me that ‘You will need help this time!’ 🤔 I did stumbled to think ‘if I could really do it myself this time?’ – but then I gave myself self confidence that ‘it is possible!’
I actually did not ‘panic’ this time round and got most planning and preparation starting only in July! Even my bestie and hubby were asking why was I so relaxed this time round! 🤣 So, I put some ‘stress’ on myself – more stress when the house water pipe burst and required renovation. The whole day cleaning/mopping the kitchen actually resulted to my rectum bleeding (due to over squating) and some mild contraction- panic la tu that day (I wasn’t ready for birth at that point and it was just 35 weeks of pregnancy!); so I actually went to bed rest [i didn’t expose this earlier as I don’t want cause a major concern]. Thankfully all was fine then. I quickly finished up my ‘planning’ during the period of rest!
So, then came the plan – where I cooked some food and stored in freezer, partially prepared some food/soup ingredients and stored raw meat in the freezer. Menus for two weeks were written and passed to hubby (just in case I needed his help – I labeled most of the things) and it was also my guide (which can be repeated in weeks ahead). I was more concerned about Noelle and Nikki’s meals when I am away in hospital – because when I am back from hospital, I am sure everything would be in place! And it went as long expected (and I required the least help from hubby – though he did offered help; I find myself working on it far faster than explaining to him 😝). But by him helping me cut and prepare fruits for the girls every morning, it did save my 30 min on a daily basis! Like what hubby said, I just required a part time nanny to look after the other two!
While many think that the meal plans I prepared seem tedious, to me – actually they were pretty simple (imagine if you work on excel all day long in office for few years, you will be so familiar with it – so myself working in kitchen for these four years or more on a daily basis, I become so familiar with it too)!
I wasn’t ‘tired’ per say, but actually feeling contented! The freezer and fridge were almost full when I left for the hospital. And slowly now, it became empty – actually the feeling is great – seeing how things fall in plan! I not only followed the plan but as days go by (where my lethargic feelings went away and I slowly gained energy) I also could improvised the dishes – for example, from baked chicken I could stew it instead! The key was preparing ‘healthy and balanced’ meals – rather than ‘confinement food’, per say!
During this ‘recuperating’ period, being ‘happy’ and doing things that make me ‘happy’ are two most important thing! The main reason why I don’t like having a confinement lady is – I don’t like having a stranger at home; what more a stranger who can ‘nag’ me though I am the one paying her! I don’t need someone to look after myself as I can look after myself – and having a fully breastfed baby who just direct latch – taking care of the baby is minimal.

Again, the issue is then looking after the two elder kids! And I trust no other than my hubby with them two! Thankfully, hubby’s company has two weeks paternity (though he has been working from home and going back to work for 1.5 days🙄) and this is also his daddy’s role- so he was in charge of the two kids (though it was more like the two kids bullying him 😂)! Well, overall, he did well with the two fellas in these two weeks! It was more like he was having confinement as in ‘confined’ to the two girls! 🙄😂
The short grocery shoppings that hubby brought us along was also mind rejuvenating !
I have also some fabulous people to thank – who thought of me and offered to cook for me (or help around) during this period – though I ‘rejected’ most of them, ‘kam-siah’!
I no longer have a pre-planned menu tomorrow but as I mentioned a lot can be repeated from the same planned menu! Next week will also be the real test when hubby officially goes to work (and comes home late🙄)!